More Takes on the Bridge Theme 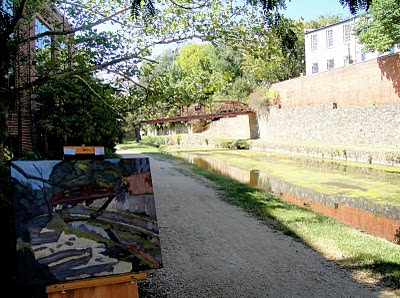 I dug in along the canal today, down from the bridge that- when I was a kid- was the only way to cross over the canal and follow the towpath. That was before all the development on the south side of the canal, development of which I largely approve. The canal's longevity will depend upon people appreciating it, and I'm so glad those attractive offices and apartments have been a success. This bridge was pure, squealing delight for us kids when my dad would take us biking along the canal, and later it represented a bridge to solitude for this angst-ridden mod teenager of the 1980's. Now that the Crescent Trail exists, I usually bypass it when I go biking, but I do relish the challenge of making that turn up the north ramp without putting my foot down. Here's to the bridge of squealing delight and liberation! 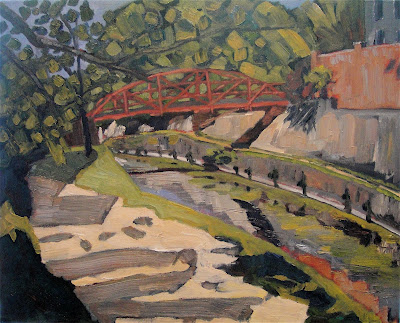 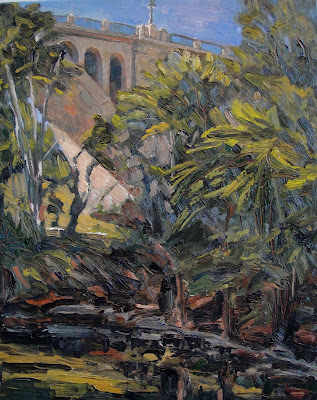 Taft Bridge, from Rock Creek (16 X 20"). Sold.
The Taft Bridge is the Connecticut Avenue bridge over Rock Creek Park. It's arguably the most elegant and lyrical of Washington's big bridges. It went up when my dad was a kid, and he grew up calling it the "million-dollar bridge", because it was reportedly the first bridge built in Washington that cost a million dollars. It doesn't exude quite the power and majesty of Key Bridge, but I'm always impressed by how it works with the landscape and how the landscape works with it. This is a big part of what excites me about bridges. They represent such artificial impositions on the landscape, and yet the landscape adapts and ultimately doesn't give a damn. And bridges make such a difference in terms of improving the quality of human life. One notes this when one goes to a country like Laos which has almost no bridges. If the people knew what they were missing, they might rise up and complain. But they don't and so haven't... and ironically are a happier people than we are... but I do think they'd find more delight in a few more bridges.

In process, after leaving Jack's Boathouse 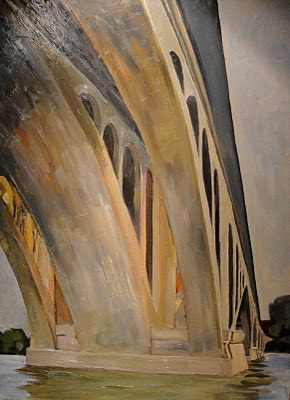 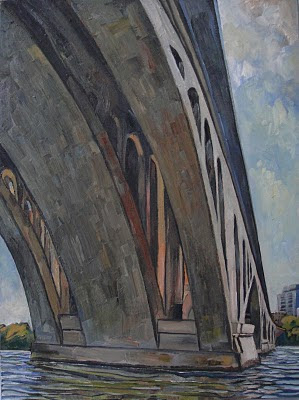 This was started the day after KeyBam! was done. Paul of Jack's Boathouse and his staff were very generous and accommodating of this scruffy painter who wandered in. Jack's Boathouse is an amazing resource, by the way. For $12/person/hour you can rent a kayak or a canoe and cruise all over the river. People file in on their lunch breaks, and they are set up in a jiffy and on their way. No hassles, no standing around. Very well-run outfit. Get thee to the river!
Posted by Edward Bear Miller at 1:05 PM