April and May around Washington

These are plein-air pieces from this spring, all of watery subjects: Rock Creek, The Severn River, and the Tidal Basin. 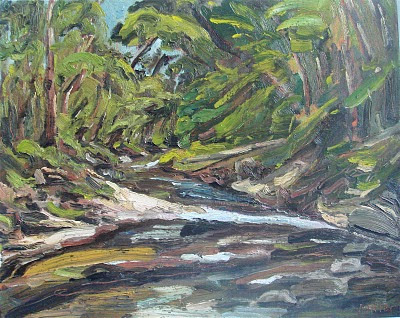 This is a great spot for kids, dogs, and ducks to splash around. Shad used to run the creek when I was a kid, and I am told that eels from the ocean still do make appearances. I felt the spirit of August Lundberg peering over my shoulder as I put the finishing strokes on this one. I was not conscious of his influence on the piece until it was basically done. 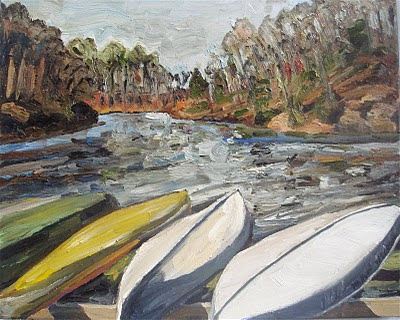 I drove over to Sherwood Forest on the Severn River (by Annapolis, MD) to paint with Michael Gaudreau, a painter friend with whom I showed last summer at the Corscaden Barn. This rack of resting boats included two canoes, a kayak, and a sunfish. The forms are very universal and could easily pass for insects, seeds, or metaphors for our own bodies, souls, plans, or memories. 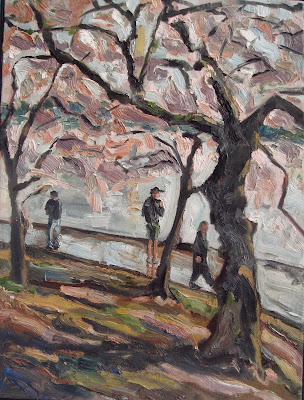 Rundown indeed! Maribel and I thoroughly enjoyed basking in the blossoms and people-watching on the Friday of the National Cherryblossom Festival here in the Disrict. I decided to get there early on Saturday and crank out a study of a monument in the morning light peaking through the lissome trees' veils. The tidal basin was swarming with people as I set up my easel and just focused on the tree forms, the Washington Monument, the curve of the water, and the petals all around. I thought I had finished when a passerby remarked that it was strange I hadn't included any of the thousands of people in the scene. I realized she was right. I had unconsciously ignored the humans in favor of the trees. But it seemed that almost everyone else was also doing their best to look past the passing swarms of gawkers. The characters I distributed into my little scene have that same "ships passing in the night" feel to them as they float blithely through the pink netherworld.
Posted by Edward Bear Miller at 3:43 PM No comments: 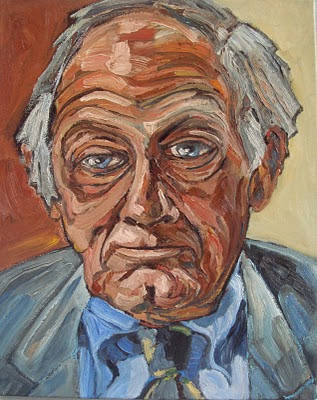 Papa recently retired from 44 years of government service plus two years on the USS Essex. He kindly agreed to sit for me one day and this was the result of our efforts. We started after a breakfast in his bay window and finished in the late afternoon, with the light on the opposite side of his head from where it had been in the morning. The compassion, wisdom, and fortitude of a seasoned magistrate shines through here, though Mama says the old man just looks worn out and in need of a haircut.
Posted by Edward Bear Miller at 3:25 PM 1 comment: 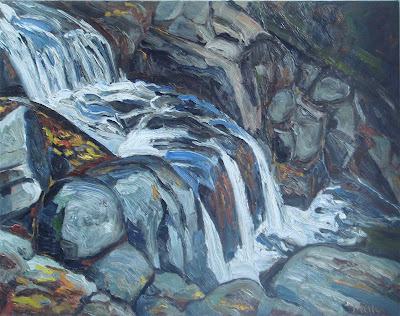 Phelps Brook runs very close to my family's house in Keene Valley, and Maribel and I listen to it each night and morning from our sleeping porch. Trinity Falls is a name I came up with for a a little series of precipitous cascades that ends in a secluded pool. Year after year I go there to be renewed by the elemental purity of these waters. I have painted and sketched the falls on many occasions, but this off-kilter view from above may be the most exciting treatment yet. It is monumental and solid, yet it rushes and spins, provoking vertigo in the viewer the same way that Niagara Falls or the Empire State Building do; only this is a very intimate, secret spot for tapping nature's creative power. I plan to construct a frame for this that gives the forms some breathing room. I'm also planning to paint the falls from the next pool down from them, looking up from the abyss. 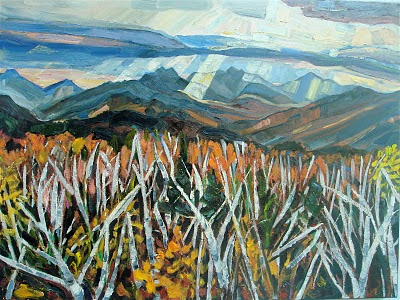 Nundagao is an exposed ridgeline that provides spectacular views of the Great Range. This painting is based on a series of photos I took one very windy, dynamic day in November when my uncle David and I ventured out into uncertain skies. The landscape in November becomes a study in dead grays, burnt sienna, black, and leftover golds. The sky alternated between snow flurries and sun rays. The viewer of this piece seems to hover, riding the wind above blowndown birches.
Posted by Edward Bear Miller at 9:47 AM 1 comment: