One June Evening, 22 X 90", Collection of Noel C. Miller
A storybook realm of possibilities runs through this triptych. 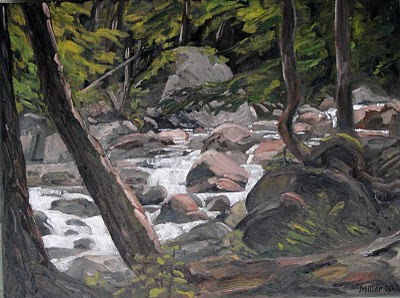 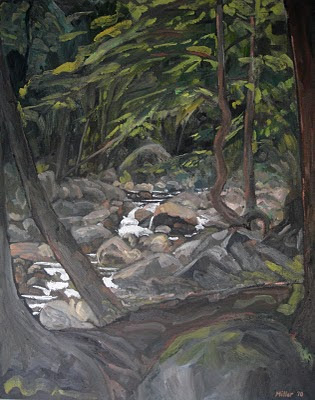 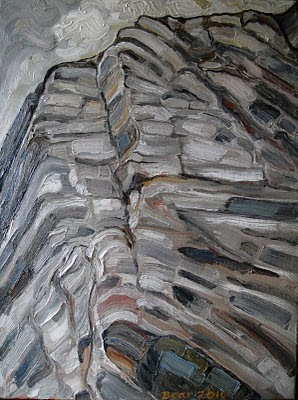 Climbing (Climb On), 18 X 24, sold
Frosted Mug is a classic Adirondack rock climb that I first top-roped in 1990 (very ineptly in every sense). As the the nineties went on I grew to confidently lead it maybe five times without hanging. There was an August or two when I used to do laps on it on my own with a microscender. Now I go back to it, get spanked, and struggle to the top. I still struggle to the top, but I know there will come years when I won't be able to and may not even be willing to try. Anyway, this painting was 100% executed at the base of the rock climb that means more to me than any other rock climb. As with a good poem, Frosted Mug takes on new significance with each run through. 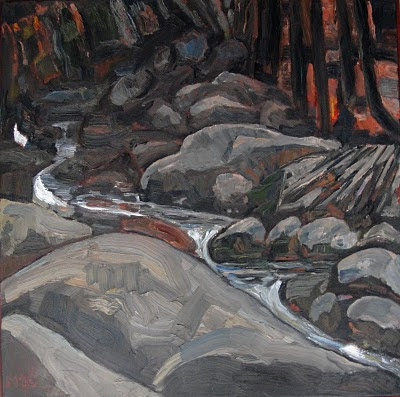 Morning Light on the Brook, 20 X 20". Sold.
Sometimes when I have a really good painting that I wish I had another version of, I'll make a painting based on the first painting. This is one of those. It's a move I took from the Van Gogh play book. The first one is small and fresh, and it's part of my personal collection. This one is bigger and richer. 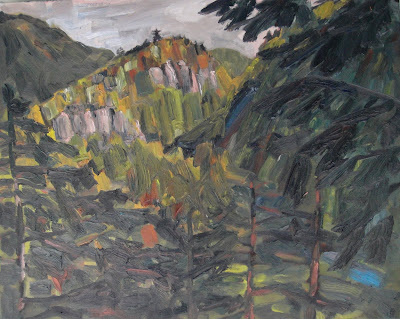 Beer Walls from Round Mountain, 16 X 20".
I hauled my new French easel up the Burns Weston trail and stopped at the lookout over the canyon below Chapel Pond where the Beer Walls reign. This is the result. It has many redeeming qualities, but I'm not convinced it holds together completely. 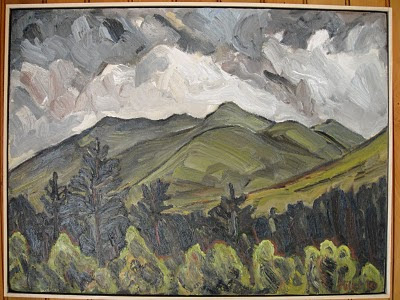 Brothers in June, 18 X 24", auctioned for North Country SPCA.
The Brothers ranks among my favorite hikes, and this piece was painted from my family's porch. It's a familiar scene and one I have painted many times before. I love it!!! 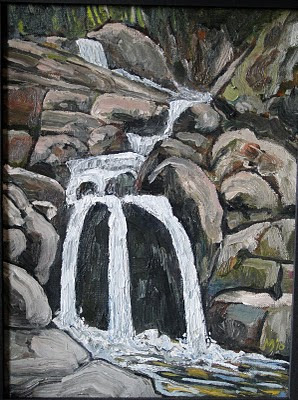 Trinity Falls in June, 11 X 14".
A theme to which I love to return, this was my first painting up here this year. It had issues, including torrents that resembled speghetti... but the elements shaped up into a compelling, cohesive interpretation of what I consider the fountain of the waters of life. 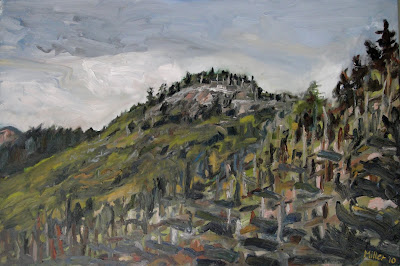 Baxter, 24 X 36".
Baxter is the peak I have climbed more than any other. Three to Ten times a summer. Maybe 100 times total. This painting has great flow of hemlock shadows, pine-scented pinks, and sturdy grays. I frankly think I knocked this one out of the park. Many thanks to the Ps and to Kerry W for use of the perch. 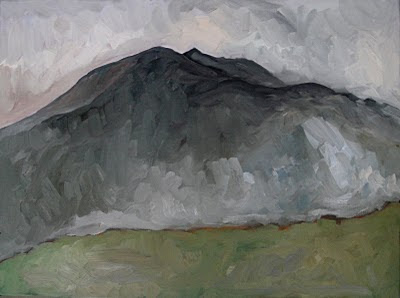 Porter Between Showers, 18 X 24. Sold.
It's hard to know when to stop painting. The first two people who saw this both asked if it was finished. At the time... between showers, high up on Beede Road... I thought I'd really nailed the combination of mist, mass, and muted sunlight. I'm still deciding, but I'm reluctant to dig back in. It has some of the flat, understated magic of a Milton Avery or Georgia O'Keefe. For me, it GLOWS and PURRRRRRRS through the mist. 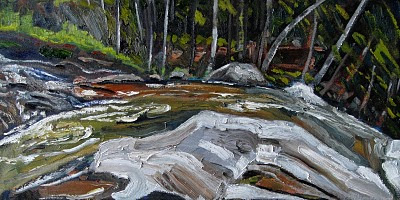 Brook's Rim, 12 X 24".
Where I start and end most days in Keene Valley. These pools hold the waters of my life. This water is about as clean as water gets these days and these rocks lock in each day's solar radiation. Put them together with your body and you enter the kingdom of heaven. The transcendental effects of the brook came and went and came and went as I worked on this. The day had no shortage of wind gusts and quick showers. I like the result, but I'd like to try again on a bigger scale.
Posted by Edward Bear Miller at 11:57 AM No comments: